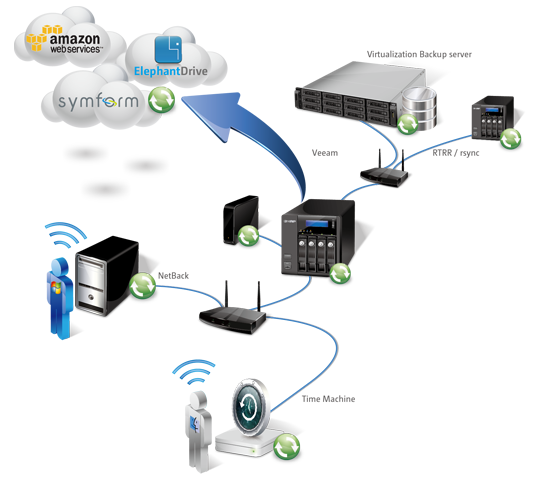 Every day, huge amount of data is produced and stored on computers and servers. It is imaginable that the loss of business data can be catastrophic. As the accident of data loss is unexpected, a good backup solution that safeguards the important data and reserves the copy for data recovery if the data loss does happen is rather essential for businesses.

QNAP Turbo NAS performs as an ideal backup center, with large storage capacity and excellent file transfer speed to greatly assist businesses on efficient backup tasks. In addition to being a backup center, the Turbo NAS can also have its data backed up to external storage devices, remote servers, and third-party cloud backup services easily and conveniently.

The QNAP NetBak Replicator, a license-free backup utility provided with any Turbo NAS unit to execute data backup on Windows OS, helps users back up files from Windows PC - entire disk drives, documents, pictures, music, videos, fonts, emails, and more - to one or multiple Turbo NAS units on the network. Besides, NetBak Replicator also supports backing up to a remote server via FTP and WebDAV. The operation is very simple, and the data backup can be done in just a few clicks by the settings of real-time synchronization, scheduled backup and auto-backup.

The Turbo NAS supports Apple Time Machine and provides Mac OS X users with an effortless solution to back up data to the Turbo NAS. This greatly saves cost of purchasing an external hard drive for every Mac user in order to back up their data. Besides, configurable storage quota for backup jobs is allowed so that IT administrators can arrange a certain amount of capacity dedicated for Mac data backup.

The Turbo NAS is compatible with various renowned backup software on the market, such as Acronis® True Image, CA® ARCserve Backup, Retrospect®, Symantec® Backup Exec, LaCie® SilverKeeper and so on. Companies that have already adopted such backup software can immediately leverage the large storage capacity found in the Turbo NAS to back up data from other sources on the network.

Many businesses have deployed virtualization in the IT environment. Besides the primary storage, a reliable backup storage is also indispensible. The Turbo NAS is virtualization-ready and is compatible with VMware® ESX server, Citrix® XenServer, and Microsoft® Hyper-V, able to be seamlessly integrated to a virtualized environment as an extended storage for data backup. For example, businesses can use compatible third-party backup software, such as Veeam, specialized in the virtualization environment for backup tasks to the Turbo NAS.

Back up from a remote server via RTRR or rsync 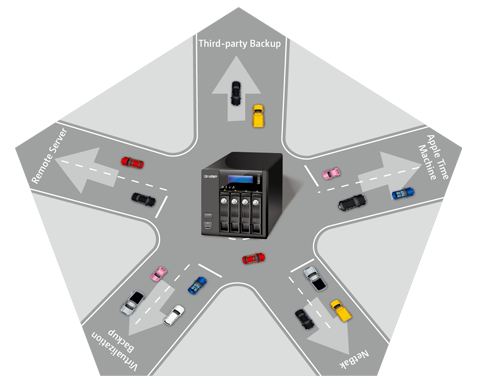 Back up to external drives

With the supports of external drives in EXT3, EXT4, FAT32, HFS+, and NTFS format and high-speed read/write performance, the Turbo NAS can back up data to these devices and restore the data in Mac and Windows environment.

In addition, the Turbo NAS is compatible with various renowned backup software on the market, such as AcronisTrue Image, CA ARCserve Backup, Retrospect, Symantec Backup Exec, LaCie SilverKeeper and so on. Companies that have already adopted such backup software can immediately back up Turbo NAS data to the external drives by means of the third party backup software.

Back up to remote server via RTRR or rsync

Data in the Turbo NAS can be backed up to another remote Turbo NAS or FTP server on a real-time basis via QNAP’s RTRR (Real-Time Remote Replication) service, or a standard rsync server on scheduling basis via rsync protocol.

With RTRR, the source Turbo NAS will monitor the files and synchronize the changes to the destination server. IT administrators can do backup tasks by instant backup and scheduled backup, with compression and SSH encryption options supported.

In addition to physical storage, the Turbo NAS leverages backup storage to the cloud. IT administrators can back up the data from the Turbo NAS to online cloud storage services, such as Amazon S3, ElephantDrive and Symform, and restore the data to your Turbo NAS anytime. Several backup modes are supported, including real-time backup, scheduled backup and so on. 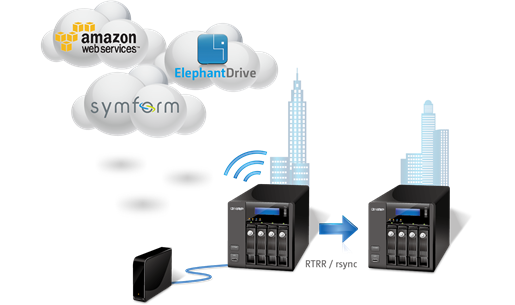