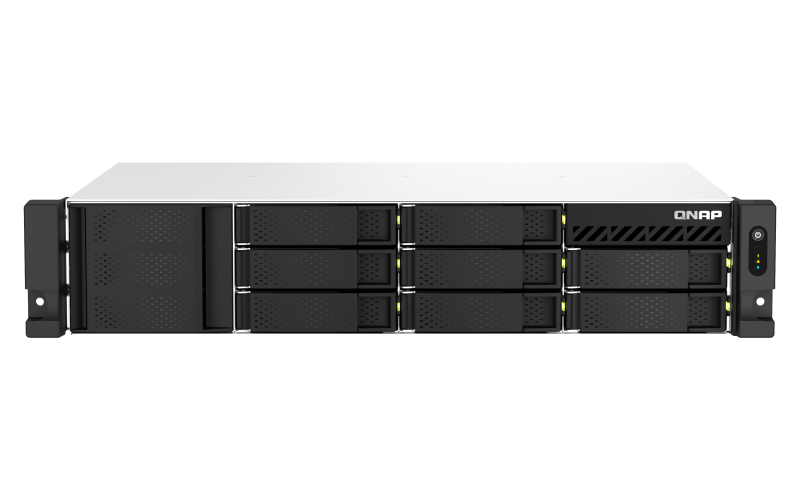 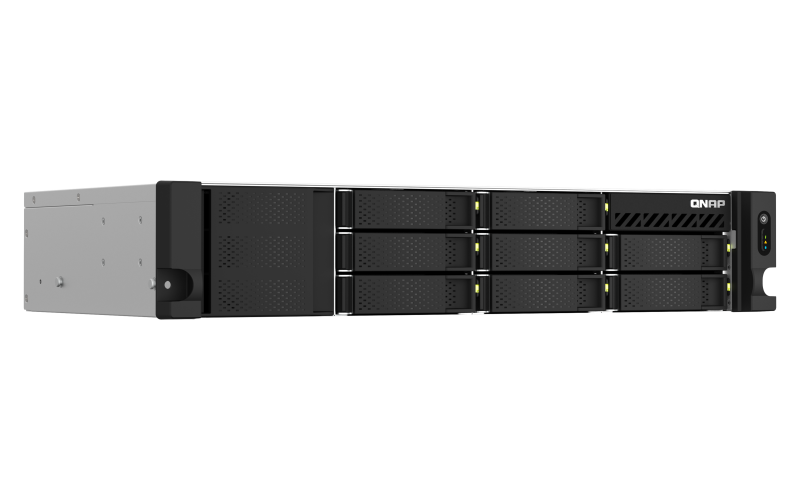 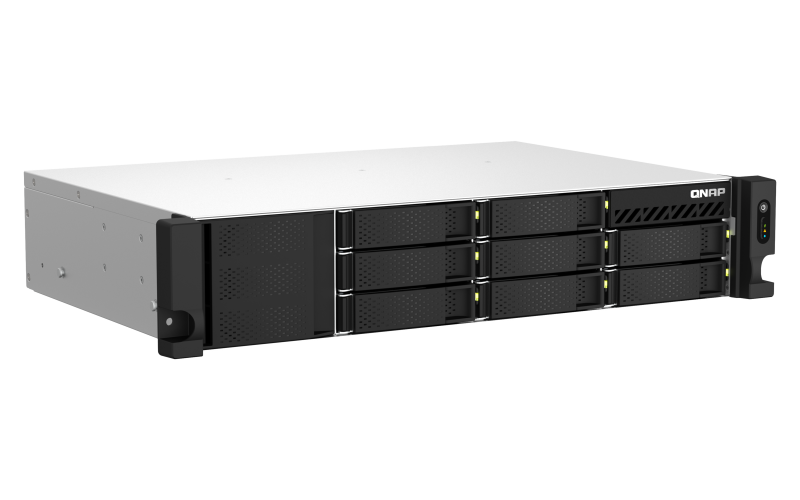 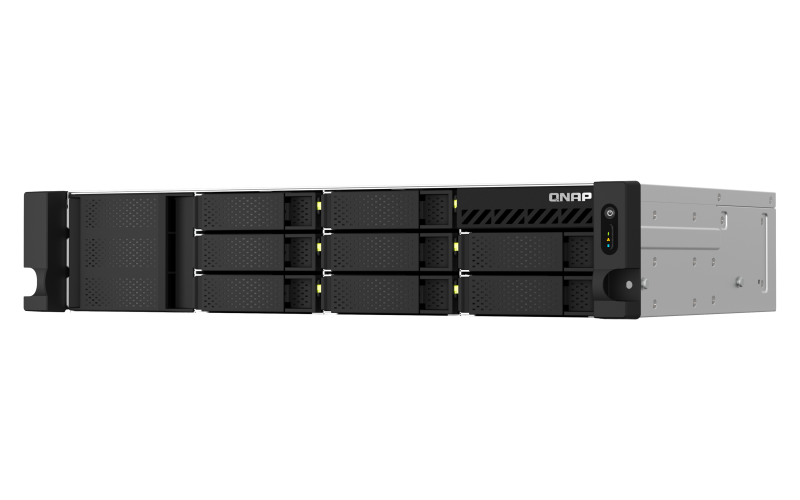 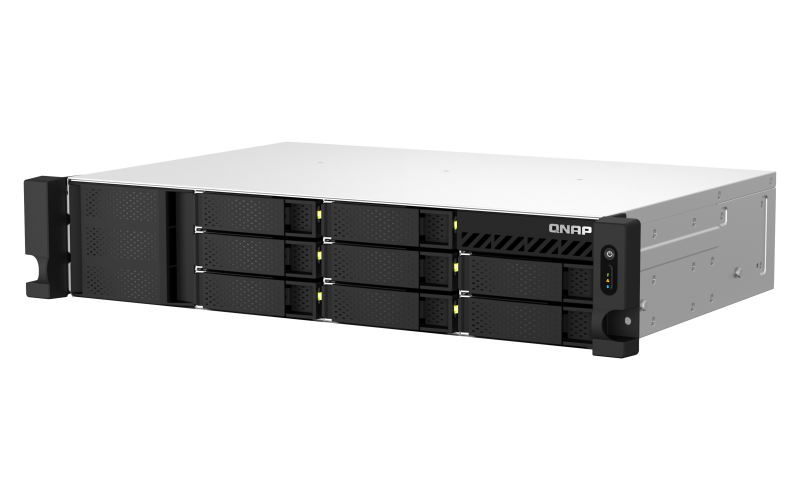 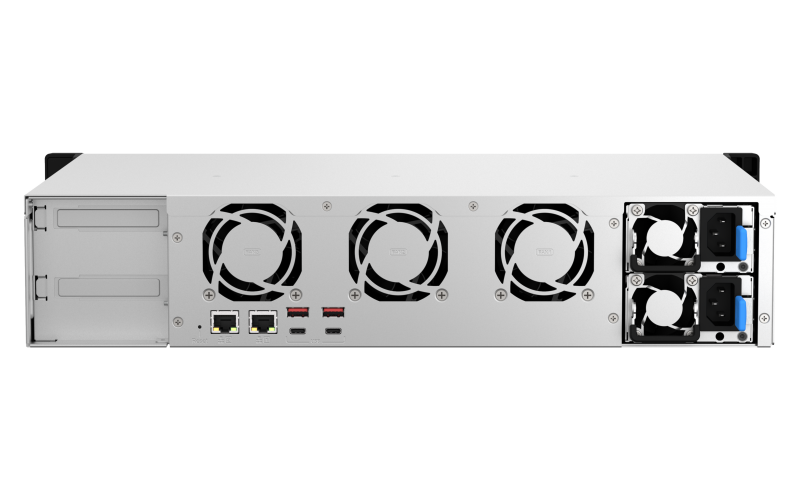 Features two 2.5GbE ports. Up to 5 Gbps transfer speeds can be achieved by using port trunking.

Host multiple virtual machines and containers to run a wide range of applications.

The rackmount NAS has a short-depth design of only 30 cm. It is perfectly suited for installation in a compact rack, or places with a lot of cabling.

2U Short depth design for up to 38% reduction in size

The 2U rackmount TS-873AeU-RP has a short depth design of only 11.7 inches (297.4 mm), making it an excellent choice for smaller racks, wall-mount AV rack cabinets, and network rack cabinets. The space saved by the short depth design can be reserved for cabling or ventilation. The TS-873AeU-RP is space-saving for flexible deployment and is especially suitable for multiple locations and applications including offices, audiovisual rooms, and security surveillance recording.

Note: Users can purchase the optional RAIL-B02 rail kit to deploy the TS-873AeU-RP in a 19-inch rack following the ANSI/EIA-RS-310-D standard. 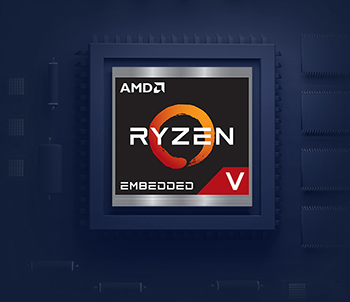 The TS-873AeU-RP comes with two 2.5GbE RJ45 LAN ports that allow you to use existing CAT5e cables to upgrade network speeds from 1 Gigabit to 2.5 Gigabit. 5GbE speeds can also be attained by using Port Trunking.

The TS-873AeU-RP has a PCIe Gen 3 x 8 slot that allows for installing various expansion cards for expanding application potential.

Adds M.2 SSD NVMe caching or 10GbE/2.5GbE connectivity to the TS-873AeU-RP for optimized performance and bandwidth.

The TS-873AeU-RP supports various apps that cover all your backup needs. Practice safe IT habits by regularly backing up files and device content, allowing them to be easily restored when needed.

For Windows®, install NetBak Replicator to back up your PC to QNAP NAS. In macOS®, just set up the built-in Time Machine® to secure your data.

Hybrid Backup Sync makes it easy to back up data from a TS-873AeU-RP to another QNAP NAS or remote server to fulfill your 3-2-1 backup strategy.

The TS-873AeU-RP supports block-based snapshots that record the state of the system at any time. It helps protect data, which can be restored back to a specific point of time, greatly helping in mitigating the threat of ransomware.

Take snapshots in seconds and revert the entire volume/LUN back to a specific point in time to prevent loss of important data.

Snapshot content can be quickly restored to a local NAS, or restored on a folder/file basis to a local/remote NAS or cloud storage. You can also conveniently view and restore snapshots from the client side.

The iSCSI Extensions for RDMA (iSER) protocol boosts the data transfer performance of VMware® ESXi storage and reduces the CPU load of the ESXi server. iSER support can be added to the TS-873AeU-RP by installing a QNAP QXG-10G2SF-CX4 10GbE PCIe card, which uses the Mellanox® ConnectX-4 controller. iSER can provide a significant increase in performance, providing an essential tool to optimize demanding virtualization applications.

Note: To create an iSER connection with VMware ESXi, both the server and NAS require compatible Mellanox® NICs and switches compatible with Mellanox® or supporting PFC (Priority Flow Control) configuration.

By running multiple virtual machines and containers on the TS-873AeU-RP, you can deploy multi-tenant environments and applications to increase management efficiency and save hardware costs. Coupled with the Network & Virtual Switch app that boosts interoperability between virtual machines, containers, QNAP NAS, and other physical devices on the network, you can flexibly allocate physical and virtual network resources to simplify network deployment.

Run Linux® applications (including apps from the Software Center) directly on the NAS and remotely access the Linux® desktop from a web browser. The open-source Linux® platform is also ideal for Internet of Things development.

By installing an SR-IOV compatible PCIe SmartNIC in the TS-873AeU-RP, you can allocate bandwidth resources from a physical network card directly to VMs, increasing network efficiency and reduced CPU overheads.

Note: SR-IOV is supported by specific QNAP NAS models and should work with SR-IOV compatible adapters.

QuTScloud is a virtual appliance based on the QTS operating system. Enterprises can quickly launch QuTScloud on hypervisors including Linux® KVM, Microsoft® Hyper-V, and VMware ESXi™ to acquire advanced NAS features without requiring additional NAS hardware.

The TS-873AeU-RP is loaded with flexible privilege settings and security measures. Besides IP blocking, 2-step verification, HTTPS connection, there are more apps that help ensure optimal NAS protection against threats like malware and hackers.

myQNAPcloud allows convenient connection to the TS-873AeU-RP through the Internet without any complex DDNS settings. To ensure your remote access service is secure, myQNAPcloud strengthens keys on SSL Certificates to 2048-bits.

A virtual private network (VPN) allows secure access to network resources and services across public networks. QVPN supports creating a VPN client, using the TS-873AeU-RP as a VPN server, and WireGuard® VPN service with an easy-to-use interface for setting up a secure connection.

A security portal for the TS-873AeU-RP to check for weaknesses and offer recommendations for enhancing NAS security. It also integrates anti-virus and anti-malware scanning software.

Regularly scan your TS-873AeU-RP using the latest malware definitions. If infected files are detected, they will be immediately removed to ensure NAS data security.

TeamViewer app enables remote management and connectivity to multiple NAS devices from Windows® PCs with an unparalleled level of safety, while increasing IT efficiency and end user productivity.

The TS-873AeU-RP integrates rich apps for storing, managing, synchronizing, searching, and archiving files. It supports SMB/CIFS, AFP, and NFS protocols for streamlined file sharing across Windows®, Mac®, and Linux®/UNIX®, and provides the smartest NAS solution for professionally managing your files.

Manage, access, and share all the files in the TS-873AeU-RP and view snapshots files – all from your web browser. You can also easily mount remote NAS folders and cloud storage.

Make any file uploaded to a TS-873AeU-RP available to linked devices, such as computers, laptops and mobile devices. You can sync shared folders and team folders for group file sharing to enhance the flexibility of team projects and collaboration.

Automate your file organization ─ all you need to do is categorize files, set a schedule, and Qfiling will do the rest. Qfiling also enables smart recycling that instantly moves filtered files to the Recycle Bin.

Mount cloud storage or remote file servers to expand the capacity of the TS-873AeU-RP while also centrally managing files on the NAS, cloud storage, and remote devices.

Migrate to a new NAS

Install your NAS hard drives into a larger QNAP NAS and retain all your existing data and configurations.

The TS-873AeU-RP provides an App Center that includes feature-rich apps to expand your NAS potential!

Run a high-performance S3 compatible development environment on your TS-873AeU-RP to simplify service development workflows from testing to production. You can also move cold data from the cloud to an on-premises QuObjects to save cloud storage costs.

By using a high-capacity TS-873AeU-RP as a proxy server, online resources can be efficiently accessed with greater cost-savings and productivity, while network security is also enhanced at the same time.

A health check for your hard drives

Hard drives are at the heart of your NAS, and ensuring their long-term health and reliability is absolutely crucial. QNAP provides various methods and tools to help you monitor hard drive health, ensuring that you can take proactive decisions to safeguard your data and files.

S.M.A.R.T. and back block scanning

If any of the S.M.A.R.T. values are reported as abnormal, or bad blocks are detected, you can take early action and replace drives before potential data loss occurs.

The DA Drive Analyzer leverages ULINK cloud-based AI to predict the expected lifespan of drives, assisting you in planning future drive replacements to protect against NAS downtime and data loss.

The TS-873AeU-RP is backed by a 3-year warranty at no additional cost. You can also purchase a warranty extension that extends your warranty coverage up to 5 years.